Who Reads My Books: Chris Haringa 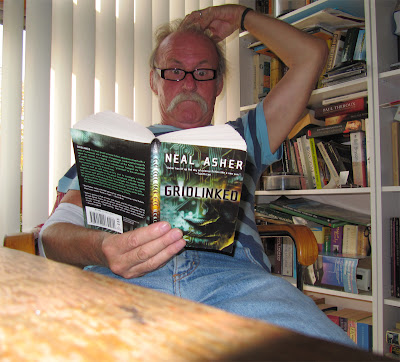 I am Dutch, 65 years of age and what Neal would call a ‘stinking old hippy’. I read heaps and heaps of SF until I was 20-something, then suddenly had enough, and never touched the stuff again apart from some fantasy. I studied chemistry without realizing what I was in for, then after half a year I found out, and dropped out. Since then I’ve worked as a labourer, factory worker, white van driver, salesman in a DIY shop, and a patient transporter for a hospital, but spent at least half of the time not doing shit but talk with me mates stoned out of my mind….

I got married in the UK to an English lady somewhere along the line and, when our first son was due to arrive, decided it was time to take life seriously. I went to a state subsidised school to become a carpenter, again without a clue what it meant to be a carpenter in everyday life. So there I was at 7 in the morning amongst my fellow carpenters, who could only talk about sex, cars and sports, which made me feel kind of lonely…but I was a responsible person now so had to hold on. I did so for 3 years until one November morning – zero degrees above zero, 7 in the morning, a touch of flu but not enough to call in sick, me standing on a ladder in the door opening of a vast building screwing in a rail to hold up big sliding doors, with wind howling past me. I felt so desperate I started to pray ( never saw a church from the inside hahaha), ‘Please dear god help me out of here, can’t stand it anymore!’ At that moment one of my co-workers came up to me and said, ‘Chris please step down from the ladder, I have something to tell you.’ So I did, and when I reached the ground he talked to me for a bit and then suddenly pushed me in the chest because he saw the big metal ladder being blown over by the wind and coming in our direction. It hit me on the big toe and broke it in two places, and would have smashed my head to bits if he would not have pushed me….

So there I was with my foot in plaster, right next to the heater being served nice cups of tea by my lovely wife… and I never went back. My next job was as an EEG/EMG technician in a general hospital. I went to evening classes for that for two years, and kept the job for ten years. Nice and warm inside the hospital, friendly people, but I got bored and, because the Misses was English and kind of homesick, we decided to give it a go and try to make a living in GB. So off we went with our, by that time with 5 kids, to a winter let in the Cotswolds.

We had a good friend there: a very successful graphic designer who promised us to set up a business together, but he failed to do so because his marriage sort of exploded. The only work available at that time was carpentry again, for much less money than I would have made doing the same in Holland. And apart from that I’d done that, seen that. So back to the Netherlands again where an old friend told me that a local comprehensive school, close to where I lived, needed a teacher to take care of the practical part of the physics lessons. To be honest I don’t think they would have hired me was it not for the fact that one of my closest friends was on the board of directors at that time…

So that’s what I did for the last 25 years and now, being 65 and all, the big holiday has started! Met Mr Asher and his wife in Greece a couple of years ago, didn’t know he was a writer at first, pleasant people to talk to over a pint or a glass of wine (contrary of what one would expect reading his blog….hahaha) One day he told me to read one of his books, but I had my doubts not being interested in SF anymore (I prefer modern American literature like John Irving, Tom Wolfe, Donna Tart and the like) but thought, whatever, I’ll give it a go. After a few chapters of Gridlinked I thought that I made the right decision a long time ago, enough SF, but I felt I should finish the book. The funny thing was that although I was not interested at all in the story, the writer managed to grab my attention so I turned a page and another page until I realized I had a page turner in my hands, well done Mister Asher!
Posted by Neal Asher at 2:22 pm

No, really, I wouldn't call anyone a stinking old hippy unless he actually did stink and, to my mind, 'hippy' isn't really derogatory.

Okay, does anyone else want to appear in this 'Who Reads My Books' series (check back through the blog, there's been a few of them)? All I need is a biog and a photograph or two.

I don't want to appear more than to note that your work, which I first encountered only a bit more than a year ago, has been the most pleasant surprise of my last several years of reading. I've developed a jaundiced eye towards science fiction lately for a number of reasons - editors who fail to apply themselves diligently and writers who desperately need it, writers who fail to describe a plausible big picture, or who can't manage to present characters worth remembering, let alone liking, or who simply lack facility with their medium such that reading their work is a chore requiring conscious effort. (A recent book I'd been looking forward to for several years was loaded, for instance, with unattributed spoken dialog between characters where the content was ambiguous to the point where I had to puzzle out which character was uttering which sentence, sometimes revising my opinion and having to go back.)

Your work, Neal, has been a real breath of fresh air in an environment filled with frequent disappointment. Rarely have I encountered a universe so engaging as the one in which resides your Polity. I've read almost all of that, and now I've got to branch out and start reading your other work.

I hereby declare that I never heard Mr. Asher use the frase 'stinking old hippy', must have been dreaming or something...;)

Thanks for that, Mason. I do what I can with the editing (including reading the book backwards a paragraph at a time) but still mistakes get by me. (Cue one of the readers here to talk about Vulture's sex-change!) I also try to make sure dialogue is easily attributable since that is one of my pet peeves. Engagement with the story is of course all - if you've got that you're less likely to notice the mistakes.

An easy assumption to make, Chris, since when I'm in rant mode I use similar epithets.

Oh, heh. Vulture. Vulture went through such radical changes that I thought the gender shift was planned! I guess you're right about engagement.

I just ordered the departure from amzon (the wife wants a xmas list from me now)...whats with the reviews? have you offended someone? too much Raki/ouzo? I need to find out.

Thud, I've commented on the reviews before:

I was always going to get punished for departing from the Polity, since many fans don't like change. Also, since it's set in a near future dystopia, it is a bit political. Some people don't like extrapolations on their own ideology.