The Day of the Triffids (again). 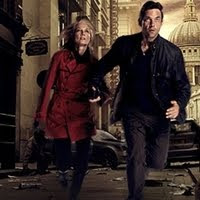 Yes, it’s yet another remake…

The triffids, apparently, are a source of fuel to supplant fossil fuels and have thus saved us from global warming. We get some thankfully understated lectures about how we fucked up the environment, with the implication that we’re getting what we deserve. This of course glosses over the fact that the disaster is due to a stellar event blinding most of the population. Maybe the ozone hole we created let the light in?

Next episode we can look forward to the hero of the hour uttering the immortal line, “Mother nature is reclaiming the planet”. Doubtless this will all end with homilies about how we should adopt a communal socialist agrarian lifestyle, sit around supping cabbage soup and farting out the tune of the Red Flag … but I’ll withhold full judgement until I’ve seen the second part.

Well, it didn’t end with the homilies but it was seriously bad. Yes, I said, this stranger appearing out of the night is going to turn out to be the hero’s dad. Why did that girl shoot at our hero, did he look like a triffid? Ah, reunion between hero and female lead, oh good grief, they’re dancing to an old gramophone record. Now the hero will have to go off on some silly mission to collect the head of a male triffid. Oops, that just got well telegraphed: the dad’s a gonner. Nope, they haven’t left that place yet because they’ve got to hang about waiting for a final confrontation with the bad guy. Ah, so pouring triffid poison into your eyes through an old African wooden mask makes triffids ignore you? That makes sense … not. And of course, the bad guy must get his just desserts from a triffid.

Lots of spoilers here, but then this – as described it – great pile of poo couldn’t really be spoiled. It was all over the place, disjointed rubbish that failed to suspend disbelief, and in which I felt absolutely nothing for the characters. Amazing how such a cast of very good actors simply couldn’t rescue it.

wake me when its over.

I couldn't be bothered to watch it. I am curious to see how it'll end, though. The book ended a bit sudden. But then all the Wyndham books I've read suffered from duff endings.

Mostly agree with what Neal wrote, especially in the updated part, because while the "Mother nature" parts were a serious pain in the ass (as if finding cheap new fuel wasn't enough reason to use something as triffids, why you need to get freaking global warming into this???), I would have overlooked that part, if the rest of the storytelling had been better. And less obvious. Anyway, I would have enjoyed some slow episodes without any action about living in this post-apocalyptic world with triffids everywhere, but they obviously didn't want to make place for that. I heard the book has more of that? Is this true? And... should I read it?

I thought the original 70's BBC adaptation did a much better job.

Some of the updates made sense, such as using the Gherkin as a signal tower instead of UCL, but mainly this was an ill thought out pile of turds. Which is odd as the scriptwriter has done some decent genre work before. Maybe it's the curse of Russell T Davies?

It would've been much better to have gone with a completely new set of characters, rather than use names from the book for a brand new set of stereotypes.

I told the Wife that this was a pile of crap and went to bed as was ill. I also said that Neal would write something about it because it was so bad.

Great to be still on a similar wavelength.