The Death of Science Fiction (Again). 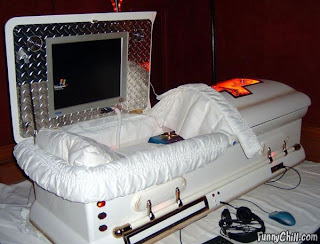 Oh, good grief, there it is again. On Facebook I followed links posted by , to yet another essay about the terminal decline of SF. This on top of another article a while back by Mark Charan Newton about ‘why SF is dying and fantasy is the future’ (no vested interest then from this fantasy writer) and lots of articles related to that, and now, if you search with the words ‘science fiction is dying’ you get numerous hits.

I do get heartily sick of all this effort to stick head-up-own-backside to examine one’s navel from the inside. I started reading SFF over thirty years ago, but it wasn’t until I got involved with the small presses, started finding out about organisations like the BSFA and the BFS, and started reading various magazines, that I discovered that SF seems to have a parasite literature attached to it. Whole swathes of self-styled academics pontificate about the meaning of it all, they wank off into deep critical analysis of stories and books – my first close encounter with this was discovering a review of Mason’s Rats that was about twice the length of the story itself – have lengthy discussions about ‘issues’ in SF and speak with all seriousness about gender divides in genre, the lack of representation of homosexuals, the implicit racism in something like Starship Troopers. Really, if you can be bothered to read all through these highly ‘intelligent’ waffles, the only response upon finishing the last line is to point and giggle.

And an old favourite in this rarified atmosphere is ‘the death of SF’ (or fantasy, or the short story, whatever). It surfaces with the almost metronic regularity of a dead fish at the tide line (stirred up, no-doubt, by some ‘new wave'). SF isn't dying, it hasn’t been ill, and frequent terminal diagnoses often see the undertaker clutching a handful of nails and a hammer and scratching his head over an empty coffin. However, discussions about this demise have been resurrecting themselves in only slightly altered form since I first read 'about' SF rather than SF itself. I'm betting there was some plonker declaring the death of SF the moment Sputnik beeped or just after Armstrong stepped onto the Moon. Really, the whole pointless staggering debate needs a nice fat stake driven through its heart.

An interesting counterpoint to oft heard announcements of the imminent demise of SF is the increasingly frequent appearance of SF concepts and themes in the work of mainstream literary writers such as Philip Roth and Margaret Atwood; SF may indeed
'die' but only in the sense that it will become ever more difficult to maintain the traditional genre distinctions that mark SF as
a separate category.

"I'm betting there was some plonker declaring the death of SF the moment Sputnik beeped or just after Neil Armstrong stepped onto the Moon."

Who Killed Science Fiction? won the Hugo Award for Best Fanzine in 1961. The Fifties were rife with talk about the death of science fiction, and Earl Kemp's symposia of so many sf pros and prominent fans summed it all up.

I'm not sure if this is going to hold up as an arguement, but if Sci-Fi is "dying", then how did Avatar make about a gazillion dollars opening weekend? So much they had to make a new number up for it.

Avatar wasnt a sf story, it was a reality show with some actors thrown in the middle of it.

Ian, yeah, maybe at some point there'll be the death of a name, but that's all.

Gary, hah! so that fanzine came out the year I was born ... better not run with that. There's those who would agree there's a connection.

Joshua, good point, and one that could have been made often over the last few decades. Generally though the doomsayers are talking about the books, then, if that doesn't work they start making other desperate distinctions.

Vaude, I'm a Celebrity Get Me Out of Here?

It's the same sky-is-falling BS as 'End of Days' jerks.

I think people analyze things far too much really. As long as there are people writing sci-fi and people reading it why on earth would it vanish? There's not a lot anyone can do about it either way.

Personally I read to relax. Most of the time I don't want anything too deep or weighty. I know when I pick up a Neal Asher book I'm going to get kick ass battles, disgusting aliens and huge space ships blowing things up. I tend to describe him to people who've never read any as Iain M Banks without the literary wanking and biggers guns :)

Currently enjoying some Spider Robinson at the moment. Neal. Any chance we could start seeing more of your books in the UK Kindle store soon?

SF dieing? It's bloody excellent at the moment.

joshua: To be fair to the "SF is dying" crowd, they've been smart enough to change their tune in recent months. They now specifically say "SF literature is dying," because they realized that all their babbling about SF's death was a load of crap when you took one second to look at the film industry (SF is doing so well in film right now you can't actually say SF is dying generally without looking like a moron).

Mr. Asher: Amen...although, I am one of those academics who analyzes the crap out of everything. Hopefully you won't hold it against me. I love SF. Read it. Try to write it. Study it. It's good stuff!

SF is not dying at all.

However, British SF literature has gotten really derivative of late.

British SF lit may be derivative but there is this lovely wave of British SF hitting North America that is fresh, invigorating, inventive, etc.
I would say that this is healthy to the genre. It should ebb and flow.
I remember a time when they said rock music was dead. Along came grunge. Not to everyones taste but it sure revived rock.
Keep it up Neal, wonderful stuff.

Saw this linked on io9, a pleasant blog which itself serves as a reminder that speculative fiction is the influenza of ideas. It never has been, or will be within our lives, anything other than going strong.

I sort of resent the anti-intellectual slant of the post, though. SF is as deserving of discussion and analysis as any other form of literature. I agree that some folks go overboard, but there's an element of that to everything in culture.

S.M.D analysis isn't the problem. That starts when writers start taking note of that rather than listen to their fans. The result can be, and has been, disastrous.

Noah, I love that word 'derivative'. Such an off-hand dismissal of the jaded.

Troy, I do enjoy a good bit of intellectual analysis, the problem is that it rarely surfaces amidst the prating of pseuds.

Neal: Oh, well that makes sense. I certainly don't do that. I'm just one of those academic folks who likes to read between the lines, but that's not part of my writing process (fiction, that is).

SMD, I've chatted with some in the publishing world about this sort of thing. The attitude is this: we must try to keep this writer away from the academic pseuds in the SF world - keep him from those pretensions of 'literature' that'll lead to his sales crashing and burning.

So, if I were to start analyzing the heck out of your novels, your sales would plummet, or does that only happen if, for example, you became an academic and started analyzing SF? *confused*

SMD, go back to my previous comment. It's when writers start taking notice of these people, start thinking their opinions are important, that the problems start. I don't.

"Your last book was very good, but you really need to focus more on feminism, the childhood traumas of your villain, the implicit racism of this war against those ... what were they, oh yes, flesh eating monsters".

"What, no more exploding spaceships?"

The writer then wonders why his next book pans despite the massive critical acclaim of the SF Literati.

Oh, well that makes a lot of sense. Now I understand your use of the "academic pseud" phrase. Folks that talk in terms of what should have been done are hardly proper academics at all.

My opinion of the 'academic pseud' has always been one of 'yeah right, whatever' then I continued going my own way. What I'm saying here about their effect on the new impressionable writer, trying to make a name for himself, comes some of those who publish and sell the books.

Maybe, as a presumed optimist, I should have called it "Will SF Live?"

One caveat -- as several commenters already noted -- my post was about *written* SF.

Artistically, yes. But poetry also lives on artistically, while it's actual sales are a bit, let's say, sub par. Westerns! Remember those? They still make quite a few western *films*, but western fiction has been on life support for decades.

So, commercially? Let's check the fiction bestseller list of 2008 of Publisher's Weekly (that of 2009 is not yet available, AFAIK).

So basically *one* SF novel in the top 100 (and it barely scraped in), and 5 in total in the top 150. Two of those by very well-established authors (Stephenson and Card), three of those media tie-ins.

Make no mistake: fantasy is selling better than SF, *much* better. Look at the 2010 catalogs of genre publishers, from Tor to Pyr: all predominantly fantasy titles.

Maybe we should be happy with the midlist SF titles still available.

Maybe the pendulum will swing back.

Or maybe we should start thinking about ... action?

I think it's very ironic: if an SF novel extrapolates current trends in society into doom, dystopia or Armageddon, then the majority of SF fandom cheers along: "Yes, that's how it will be! That feels right!"

But if some people extrapolate current sales trends of *written* SF into doom, dystopia or Armageddon, then the majority of SF fandom shouts: "No, that's wrong! SF will never die!"

Thus, in fifty years, Earth will be a hellish wasteland where over 90% of the current population has died off. But thank god they will still be able to read SF books...;-)

I have one little problem with this and with others who make a comparison between fantasy sales and science fiction, or cite science fiction’s proportion of the market: why do you assume it’s a zero sum game? I guess what you really need to do is plot year on year sales of SF back over numbers of years and plot trends. You’ll probably find all sorts of lulls and highs, so would have to be careful about making assumptions upon seeing a present upward or downward trend. Maybe someone could put together a computer model to do this, in fact, I know just the guys who could, and who could give you whatever answer you wanted.

Would that be climate change scientists?