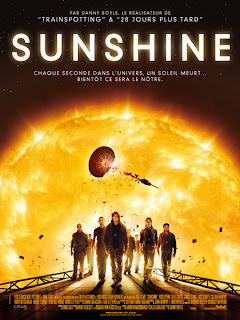 With a growing feeling of disappointment I watched Sunshine last night. Certainly there were some superb effects, though with a distinctly Kubrik 2001 retro feel, but that was about all. I somewhat doubt that the crew would have been the best choice to save the entire human race, but was prepared to let that go. I couldn’t, however, sufficiently suspend disbelief to accept a fusion bomb the ‘size of ’ would boost the sun’s output. The sun is a massive fusion reaction and dropping such a bomb would be equivalent to boosting a fire the size of Jupiter by dropping a lit match into it.
Other problems too: a guy caught out on the shield protecting the ship from the sun is burnt up in a tsunami of fire … erm what exactly was burning? The crew also began to run out of oxygen, apparently, whilst occupying a ship whose interior seemed the equivalent to a number of Albert Halls. Then, rather than continue a story of humans vs the hostile reality of space – which really could have worked – the whole thing lapsed into an Alien aping cop-out.
Really, there was no need to have a nutter creeping around offing the crew – the groundwork had already be laid for some serious moral quandaries and killings threafter. And really, adding camera distortions on top of film taken by a cameraman apparently suffering from delirium tremens adds nothing, just makes the whole viewing process irritating.
Here was a film that couldn’t make up its mind whether it was 2001 or Alien, and ended up being neither them, nor what it could have been.

For seven years I have sat alone and spoke to God. I was likewise disappointed even though the cast were pretty sound (based on previous appearances). It just got silly trying to mix metaphysical with the science of getting the job done.

I guess what made it really shit was the crew, all being a bit of a bunch of argumentative tossers who didn't really do team very well, and in classic formula fashion hastened their own end.

But I guess you have to ask: After that many years alone with each other, would rank boundaries break down, and would they become incompetent with the constant boredom?

If you want something ScFi with a little brain (not a huge amount), then Moon is worth a watch.

And finally: When is there going to be something new in the Scfi/Space genre to fill the void left by the last StarTrek, and Battlestar? Stargate doesn't count as it's not on terrestrial telly even though I love it.

You weren't happy with Chronicles of Riddick, Graeme? ;-)

I guess Avatar will have a go at it soon. Has potential, although it might turn out to be like Sunshine.

Sunshine to me was very cool graphics with a completely silly and surreal story. If I turned my mind off it was bearable, but barely so.

Agreed...beautiful looking movie with some awesome industrial design. The whole crazy guy killing everyone felt totally tacked on. There was a B movie years ago called Solar Crisis which had a similar plot but I think I enjoyed more than Sunshine in the end ^_^;

beautiful film, but empty and nonsensical. and chris evans dying from computer-cryofreeze.

Lovely looking movie, and Cillian Murphy is always worth the admission fee. But yes - the bit where it morphs into Alien feels horribly tacked-on.

It's a shame that Danny Boyle has said he doesn't want to do SF again, though - I think he's got a really good SF film in him, and this wasn't it.

Meanwhile, have you seen "Moon" yet?

The next instalment of 'The Chronicles Of Riddick' is on the go as we speak, or at least they're in New Zealand scouting locations, according to Mr Diesel's Facebook page (no, I'm not a stalker).

I have my IMAX tickets booked for 'Avatar' next week. I know the story will be shit but I'm dying to see how good the 3D is.

If it's quality sci-fi on the big screen you're looking for, then you might have to wait a couple of years for Ridley Scott's interpretation of Joe Haldeman's excellent 'The Forever War'.
It could be truly fantastic, or it might suck ass. Given Mr Scott's track record I think it might be the former.
Read it, it's great.

PS - If you like your sci-fi on screens as well as on pages, then you could do a lot worse than visit Andrew Glazebrooks's blog. He's a CGI artist that seems to have his fingers in every little up-coming sci-fi movie pie going.

I agree with you all on the Alien aping cop-out in sunshine, before that I was able to overlook a lot of its flaws, but that was really too much. There remain some nice shot scenes in my memory, but overall it was utterly disappointing.

Moon is a nice little movie, if you don't expect too much, then you might enjoy it.

cringing at the thought of Forever War being Hollywooden coffined.
eek.

'Really, there was no need to have a nutter creeping around offing the crew '

Freddy Krueger VIIIth. they prob thought, hey this movie is kinda slow, lets punch it up with skin flakes!

serious where was the skinburn, chapsticks, and heat? gravity slow was pretty good at the end. this is your black hole folks...get it?, but as far as sf goes it gets a fluck and pluck award. so, Moon is good?...will give it a shot. thanks guys! started watching Stargate: U. so far soap and standard stuff. pacing and jiggle cam reminds me of BSG. will watch a few more and then...shoot it in the face? dry hump?

Fell asleep watching Sunshine at the cinema. Saw Moon just last night, strangely. Very good indeed. I like films that don't treat me like an idiot. Riddick III? I'll definitely go see that. And if you haven't seen it, Solaris is worth a look, for a lot of reasons.

Bit off topic, but seen this yet?

About new hopes, how about this one from uruguay:
Ataque de Pánico! (ehm, don't expect anything like a story here ;-))

The chronicle of Riddick had a big name "Chronicle" in fact "Chronicles" of Riddick.... well were's the rest then?

I thought it was a fair film, not great. Pitch Black was better by. I imagine it was quite difficult to transition from Pitch black to the Chronicles of because PB had all the signature marks of a relatively low tech interstellar society (as in the first Alien movie), where as CoR was I think trying to show humanity at near to POST human status with the Elamentals and the Necromongers.

It just jarred to often, The Underverse wasn't explained properly, but at a guess cheif necromonger had found a way of swerving his perception or entire self through "underspace" a bit like the Matrix using bullet time.

No it pissed me off, you shouldn't use the word Chronicle unless you've got the drama and depth to meet expectation.

The Riddick character would have been fine if the story had involved something a little more conventional, closer to Pitch black or the history of the Furians.

As it is we have a Space bandit in charge of a dark army.... and no ones thought of a sequel to fit that prescription. One wonders why?

Well it's the girlfriend's works night out tonight, so I shall be relaxing with a haggis pizza, a six pack of Staropramen and 'Saturn 3' on DVD.

Harvey Keitel, a 7 foot psychopathic robot and Farrah Fawcett's baps. Can you really ask for more??