H is for Heinlein and Herbert 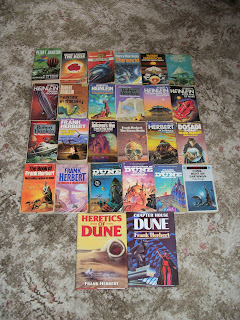 You dont have "The Forever War" by Joe Haldeman?

Nikola, these are just those I have in my collection, which is a small percentage of what I've read. It generally displays what I read at a younger age what with a preponderance there to fantasy.

Have you read 'Stranger in a strange land'?

I recollect trying to read it, Wouter, but I don't recollect finishing it.

ok, that was actually my question/point. That you dont/dont you have it in your collection. What did you think of The Forever War? If you can remember it, I thought it was very interesting to think about how perspectives on some things could change in the future and how the things we see as normal now could very well be strange in the future.

Stranger in a strange land was the first (and only) book that I have read of Heinlein so far. I dont know. Cant remember exactly what his opinions were but I can remember that it annoyed me that it shone through so clearly and there were some other minor things that annoyed me that he kept repeating over and over in that book. So I didnt bother picking up another book.

@Asher: Since you couldnt/didnt finish it. Was that because you didnt like it or? In that case any recommendations on books of that author that you could recommend? Something that is different from Stranger in a Strange Land, if there is such a book in his bibliography.

Nikola, Forever War was one of those I read as a teenager when I was reading books like a starving man eats. I know I've read it, but when I glance at a synopsis of it I only vaguely recall it, so I can't really comment.

Most of the Heinlein books are again those I read long ago. I still remember Star Beast and The Puppet Masters with some fondness, but wonder how they've dated. The only one I've reread and enjoyed within the last ten years is Starship Troopers. However, as well as telling a good story it is very political and whether or not you enjoy it depends on your political leaning.

Stranger in a Strange Land I gave up because it exhibited the worst sin in writing, to me. It bored me.