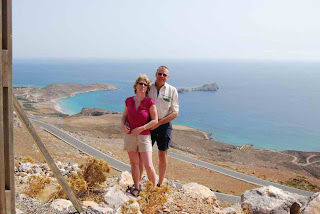 Whilst I was struggling up the writing ladder and beginning to cast an eye over those new-fangled Amstrad word processors, my brother Martin, having worked as a diesel fitter then bus driver, took an electronics course, then a job with a company repairing printers, computers and other office hardware and, as time passed, sorting out software too. He suggested to me that I needed an IBM clone computer to do my writing on. I demurred, I was a writer, so why would I need anything more than a glorified typewriter? So much for the foresight of this science fiction author.

Because he could and because he knew better (he did), Martin provided me with one nonetheless and, after a period of painful adjustment, I saw the advantages in this green screen Wordstar computer with its one megabyte hard drive. Martin moved on, working in various other computer repair companies, and upgrading me throughout that time to what I have now. He went through a divorce, has a daughter called Dawn who is now thirty, hooked up with Kathy and, after they were together for a number of years, eventually married her. He scuba dived, wind surfed, took holidays, read books, watched TV, got drunk, spent too much time on his computer, ate meals… He did all those things we all do as we live a life, and some things we don’t all do. He ended up running servers and sorting out computers at Essex Police HQ in and was valued there, made a lot of friends there. Throughout that time he was the one I could rely on when my computer went wrong, the one who sorted it all out for me, and incidentally sorted computers out for the rest of our family and numerous other people besides.

But not any more.

I had three brothers: is four years older than me and Bob is ten years older than me, and Martin was six years older than me. Difficult to write in the past tense here. I grew up with them all, they’re all a part of my life, my history. From Martin I read my first Edgar Rice Burroughs John Carter on Mars book, and some J T Edson's… The first and only shotgun I fired was his. Two small memories from a great mass of them; two small aspects of that large chunk of existence that was, well, my brother.

We’re not one of those families that need to live in each other’s pockets – it’s enough to know that the others are there, and we get on with our own lives. On occasional family get-togethers you realise you still have a lot in common, but less and less as the years pass. But still.

Martin was, I think, proud of my success. But as I said, we were not so close that we needed continuous contact, so I wondered why when he called me over the phone whilst we were in this summer. It was to inform me that he’d been diagnosed with cancer of the oesophagus. He would have six weeks of chemo then an operation to remove the affected part. All very matter-of-fact, and maybe some degree of unconscious self-preservation stopped me checking out statistics on the Internet.

He was operated on about the time we got back – part of his oesophagus and stomach removed, and the two severed ends sewn together again. He spent many weeks in hospital. We went in to see him and it shocked me to see how thin he was, but then, he hadn’t eaten food in four weeks, the food fed in by tube. Even the water was fed in by tube and all he could do was rinse his mouth out and not swallow. While he was in hospital he had problems, things weren’t healing up, he had a leak inside, then, all at once he was out. Looked like he was getting there.

Out of hospital for just a few weeks and he didn’t improve, almost died and was taken back. Eventually they got round to testing the fluid in his abdomen only to discover a secondary inoperable cancer. Quite bald statement then: he is going to die, and soon. How do you handle that? It’s something you can neither deny or ignore. You can get angry, but it doesn’t change the verdict, and in the end you just feel a horrible hollow misery. We went to see him in hospital, he was skeletal, barely coherent, obviously uncomfortable. His life-span was one week, then two weeks, then  a few days, then twenty-four hours. He died today on Sunday 24th January, and has left a hole in my life. He was 54 years old and too damn fucking young to die.

I guess I’m not the first person to say that.

Email ThisBlogThis!Share to TwitterShare to FacebookShare to Pinterest
Labels: People

So sorry for your loss.

Very sorry to hear this Neal. My wife lost her mother 16 months ago in a very similar fashion.

Sorry to say you're going to miss him 'til you go.

It's hard to lose part of your family.

I'm very sad for your loss Neal. My father had an long 2 year struggle with cancer. He died age 55.

That was 15 years ago and I miss him still.

So sorry for your loss

I am very, very sorry, Neal.

oh Neal, i am so sorry to read this. too fast, too soon.

Martin sounds like a hell of a guy and a great brother.

pro tip: no need to refer to him in the past tense. just as real and present in your mind and heart now as yesterday. when people are that close to us, especially family, there is no such thing as past tense.

this is the cycle, and people do this more often than not (i'm generalizing for the u.s. side of the pond, not sure if Merlin is still running the anemone Druids out of Cumbernauld). writing him in to your pages is a great way to keep your feelings intact, polished and registered with the boss ganglia you're working for. an opinion.

this will cheer you up, folks thought it would be funny to take off my toupee and show me to 8 yer olds.
http://planetoddity.com/sea-pig-one-of-the-ugliest-sea-creature/
thats, me in the middle. salt water addict, and, yep i read Asher.

I'm very sorry to hear this. I wish you and your family the best.

I’ve been reading your books for several years and have enjoyed them immensely, but today is the first time I’ve checked your blog.

Just wanted to say how sorry I was to hear of your loss.

Thats horrible to hear, I'm sorry.
Why can't we just hurry up and live forever?

My deepest condolences on you loss.

Our thoughts are with you Neal. Very sorry for your loss.

Sorry for your loss Neal.

For whatever it is worth, your wonderful writing about your fond memories and experiences with Martin will now forever be a part of the memory of the Asher hive-mind.

so sorry to hear, I lost both Grandparents to cancer as well as an Aunt and Uncle.

I have two younger brothers and we are very close. We had to be because our parents separated when we were all quite young and we have so many memories.

We dont see each other as much as we should but we know we can turn to each other if we had a problem.

Again, sorry to hear about your loss, the pain will pass.

My sympathies for your loss Mr Asher.
My mother died from leukemia some twenty years ago, just shy of her sixtieth birthday. I miss her still.

My sincerest condolences Neal - my thoughts are with you.

It sounds to me like a life well lived. What more can we ask for?

I'm so sorry to hear about your brother. I lost a sister when I was 25. She was 22. And, although we never got to share a long life, her absence has always left a hole in my consciousness.

Fortunately my brother, her twin, is still here, even if a continent away.

I can't imagine what a hole 50+ years must leave.

My thoughts and sympathy are with you.

Condolences to you, your family, and your brother's family.

Neal, I'm sorry. Here's to a future of Golem chasis we can download to... Keep him in your thoughts and you keep him alive.

My condolences Neal, my siblings are so very special to me and health-wise the light of fortune has shined on us as we have aged, most of us are into our fifties that the inevitability of our lives will catch up to us all. I'm not looking forward to it one bit. Thanks for telling us about your brother.

I am sorry for your loss Neal.

Sorry to hear of your loss. :(

Thanks for the comments. There's nothing much to say really other than 'sorry to hear that'. It brings home to me a determination to enjoy every damned fucking second of my life (well it did when my father died a few years ago too). Makes you realise why being very serious and political is more often the territory of those before the age of forty (yeah, I know that's where a lot of you are here). After that age the 'fuck, I'm going to die' thought gets stronger as people you know start dropping like flies around you.

I am so sorry you have you brother Martin only in memories now, Neal. Thanks for telling us about him.

times like these you realise life is very short... my deepest sympathies neal.