J & K are for Jensen to Kuttner 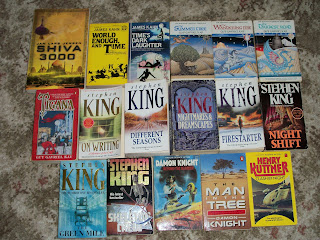 the only thing on this list that i have is the Damon Knight. not his best work imho. you stumped me completely, never heard of this King guy.

Stephen King short stories are brilliant. The bloke is a genius. His only real stinker in my opinion was "The Cell", great start, good middle and then it turned into utter unmitigated shit.

Vaude, have you seen the film "The Mist"? that's based on a Stephen King short Story, the film has a better ending than the book story.

I did enjoy many of his earlier books and his short stories are certainly superb. His problem, unfortunately, was the same as it has been for many successful authors: his power grew and the comparative power of his editors collapsed, which resulted in book bloat. Dreamcatcher being a prime example.

I'v not picked a King since Cell. However The Stand Uncut, is due for a re-read, and Salems Lot was one of the creepiest books I ever read.

How do you check yourself for book bloat (when the time comes, if at all)? And would the blog here constitute a safety valve.

Luckily book bloat doesn't seem to be a tendency of mine (though others should judge that)- when edited by the Macmillan editor my books tend to grow, since he feels I under-explain. My tendency is towards over-complication and proliferation of plot lines. What I try to do, when I edit, is look chop away the waffle, and anything else that's not necessary for the story.

I like the stylish cover art for the
three books by Guy Gavriel Kay arrayed in the first row of your display. Would you happen to
know the artist's name?

vaudeviewgalor raandisisraisins said...
This comment has been removed by the author.
5:10 pm

yes. i like the Berni Wrightson sketches for the beasts and thats about it (super picky about movies watching 8+ a week). Stephen King is sort of an ubiquitious guy in the u.s. that i never bothered with him. everyones bookshelves had a few (now it's PK Dick). the people who read him didnt read what i did so i never got any credible recommendations of his books from people who had not read Sheep Look Up, The Genocides, Ellison, Cordwainer, Sturgeon, Vance, good stuff etc.
one guy who read a lot of King i gave Harrison's first Stainless Steel Rat. light bulb. he's all over sf stuff now. can't wait til he cracks The Skinner and his first Cordwainer.
asleep yet? sorry.

The Summer Tree series was excellent.